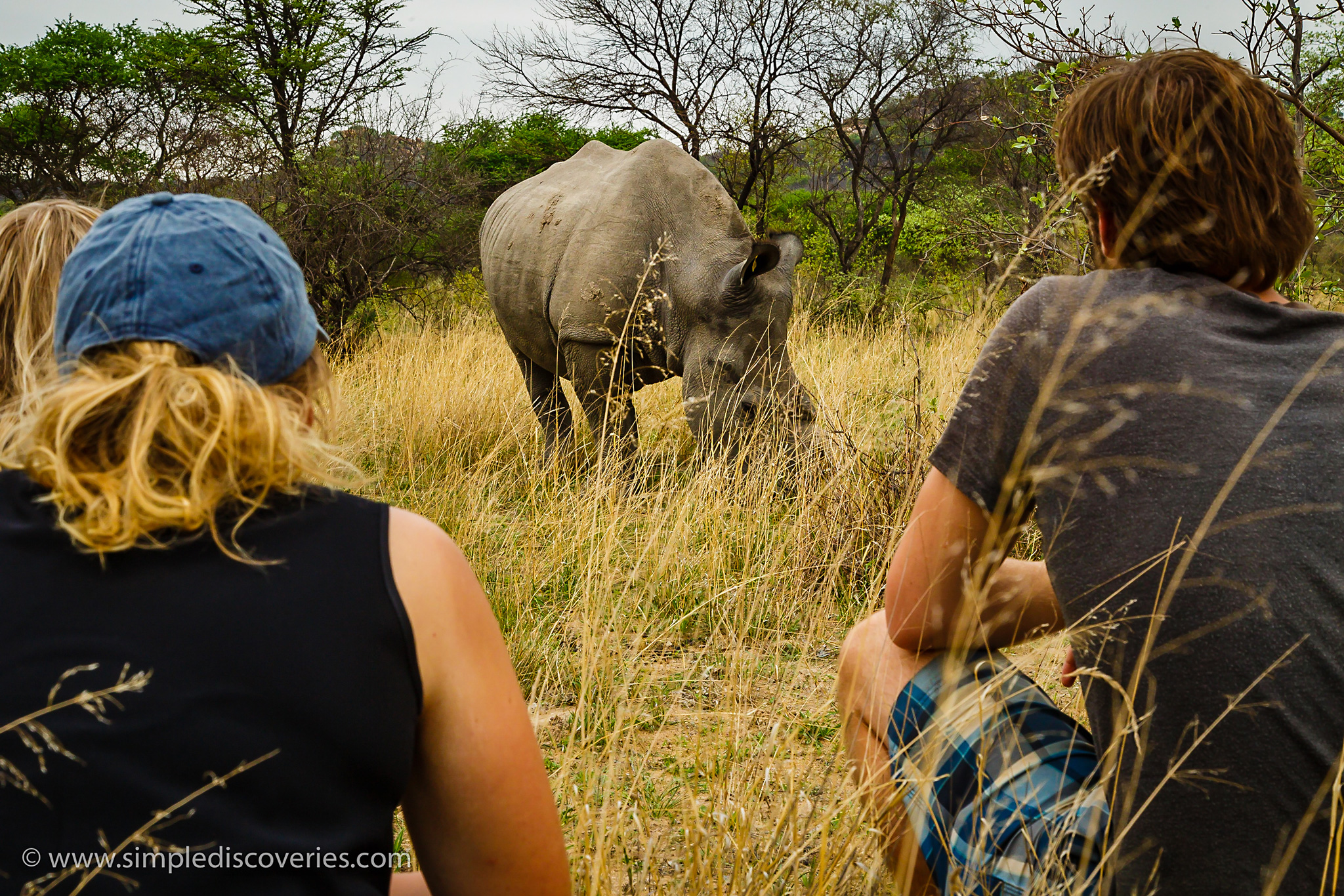 By MichelleL22nd February 2017 No Comments

It felt like a scene you might watch on a wildlife documentary. We were stooped over, shuffling through grass and brush, our eyes darting between the powerful creature we were approaching and the tall man in khaki. We were exploring Zimbabwe’s Matopos National Park and working our way closer to a pair of African White Rhinos. 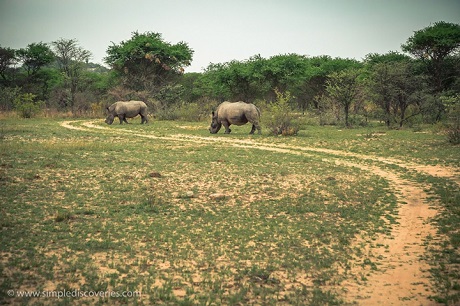 A pair of African White Rhinos grazes before us in Zimbabwe’s Matopos National Park.

The tall man in khaki is Ian Harmer, our guide for a rhino walk that is part of our overland adventure itinerary with Acacia Africa. Ian’s hand went up and we came to a sudden halt. One of the Rhino’s mannerisms tipped Ian off that we were close enough…at least for now. We squatted down, only about 50 meters from the ~1700 kg (~3740 lb) animal, and watched. Between snorts and grunts, the rhino before us went back to her routine, grazing peacefully among the grass and granite rocks of Matopos. Despite our presence, it was a peaceful moment amid a rather desperate fight. 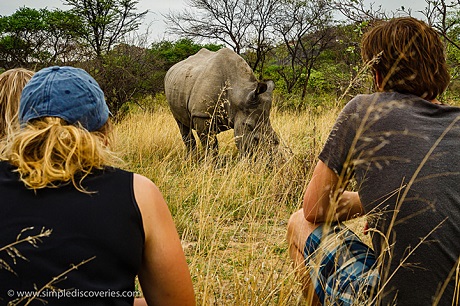 We got within meters of a pair of endangered African White Rhinos.

Occasionally you hear about the rhino’s struggle in world headlines. Armed protection. Desperate breeding programs. Hundreds of pounds of seized rhino horns being set ablaze. All measures with the intent of preventing the looming extinction of these amazing creatures. In Matopos alone, there were 156 rhinos 8 years ago. Now there’s around 53. Most of the decline is attributable to money hungry poachers. Ian whispered to us as we gazed upon the stoutly creature, “This year alone, nearly 81 rhinos have been killed in Namibia’s Etosha National Park.” At the current rate, Ian suggests the rhinos may be wiped off this planet in as little as five years…or even less. After all, the rhinos are facing the fastest extinction rate of any animal on the planet. But why? 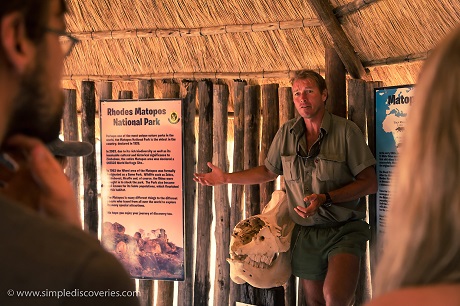 Ian Harmer of African Wanderer Safaris shares with us the rhino’s plight – next to the skull of a poached rhino.

It comes down to money. And lots of it. In China and much of Asia, ground rhino horn is prized in traditional medicine. It has been used to treat everything from fever to hangovers. Recently, spurred on by Western media, rhino horn has also been viewed as the ultimate sexual enhancer – believed by some to increase male stamina, among other attributes. This belief stems from the fact that the rhino exhibits some pretty impressive stamina itself. Breeding can last a period of hours. For all these reasons, ground rhino horn is more valuable per ounce than gold on the black market. For a poacher, one animal’s horn could net them upwards of $300,000, making the trade more lucrative than illicit drugs in some countries. 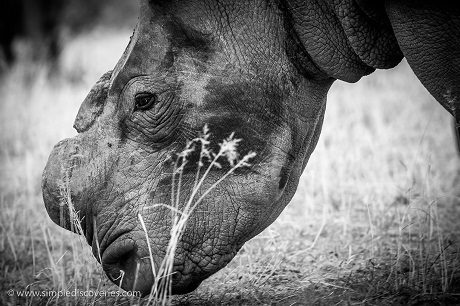 Despite proactively de-horning rhinos, they are still poached for any remaining traces of horn.

And all this killing is founded on falsehoods. Many recent medical studies have shown rhino horn to range from useless to no better than the average aspirin. That’s because rhino horn is made from keratin. It’s generally the same substance as our own hair or fingernails. In other words, one can bite their nails for the same supposed effects as rhino horn. But beliefs and market demands seem to draw a blind eye to these facts.

False beliefs into the medical advantages of rhino horn are driving rhinos to extinction.

Ian motioned us to move to another vantage point. “Please take pictures of these beautiful animals,” he told us, “but make sure you’ve inhibited your camera’s GPS!” Ian’s warning a real reminder that we were in a war zone with poachers. GPS coordinates on social media could serve as a beacon for where a literal “gold mine” in sales could be found. As we inched closer Ian suggested that the impending fate of the rhino might be stopped with some alternative thinking. “You’ll notice these rhino’s horns have been cut off. Being keratin, the horns grow back just like our own fingernails.” While Ian’s team had removed the horns from the rhinos to discourage their poaching, the process could be an innovative way to disrupt the illegal markets. Ian suggested, “Perhaps we could farm rhino horn, selling it legally and in a humane manner.” Ian isn’t alone in this thought as others throughout southern Africa have begun stockpiling rhino horn that has been humanely harvested. With horns growing at about 4 centimeters per year, a rhino could generate nearly $2 million in profit over its lifespan. If such ethically sourced horn were to suddenly flood the Asian markets, it could significantly drop the black market value. But selling rhino horn is currently illegal, no matter how the horns have been obtained. Currently, the Convention on International Trade in Endangered Species of Wild Fauna and Flora (CITES)  supports the ban on sales…even though this stance has done little more than to raise the value of a dwindling supply. Conversely, CITES and opponents of legalizing the sale of rhino horn believe that such a practice might cause poachers to increase their focus on other illegal products, like ivory. Regardless, the current measures in place are woefully inadequate. 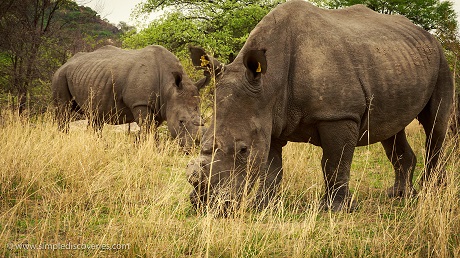 Ian motioned for us to make our way back to our vehicles. The rhinos, having grazed much of the area around us, began lumbering off to find the next expanse of wild grass. Driving back along Matopos’ winding roads, we contemplated what we were so fortunate to have just experienced. While our overland exploration with Acacia Africa brought us to Matopos National Park, we hadn’t expected to learn of about the struggle to preserve one of Africa’s most iconic animals. It’s a discovery that carries with it a responsibility…to share of the struggle and encourage you to gain a deeper understanding. After all, it’s upon each and every one of us to take care of this planet and its inhabitants for generations to come. 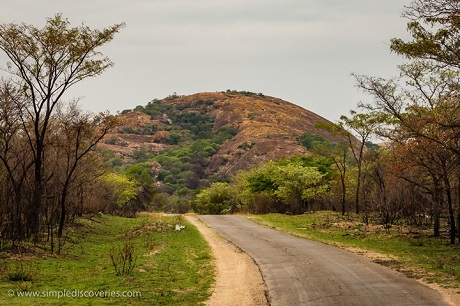 Matopos National Park is filled with natural wonder apart from its spectacular rhinos. 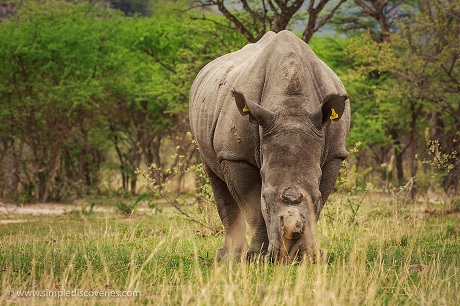 Footnote: If our article makes you ask what you can do to help prevent extinction of the rhinos; there are many ways to help. From donating to organizations that are working hard to protect the rhinos, often with less manpower and older technology than poachers, to writing to policymakers. There are many great articles on the web highlighting the rhino struggle. Do your homework, understand both sides, and then take action. And do make your way to Africa soon to see these amazing creatures!

Blog and images by: Simple Discoveries

Two former NASA rocket scientists are on an around-the-world journey, sharing discoveries of innovation and exploration as they travel. They recently partnered with Acacia Africa to compare the challenges and discoveries of overland travel to spaceflight while sharing examples of Africa’s natural beauty. You can read more and follow their social media streams at www.simplediscoveries.com.